Welcome in the Heart of Munich

What is «Bellevue di Monaco» ? 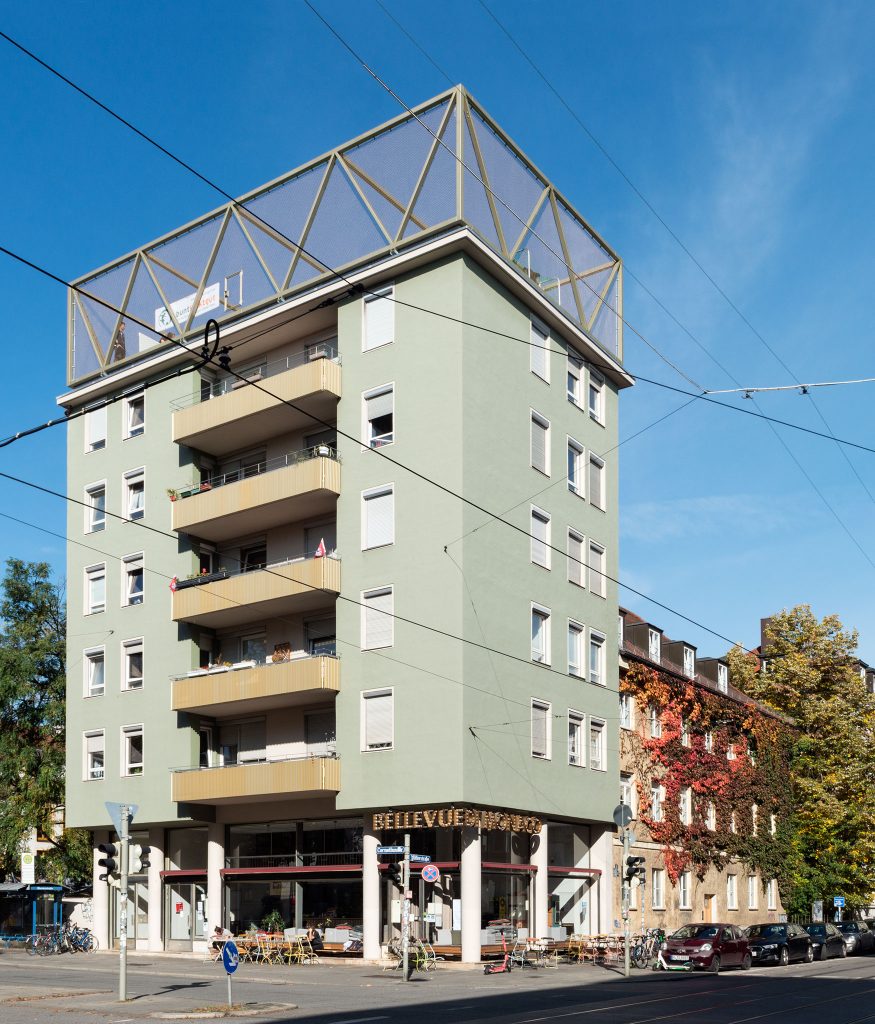 The Bellevue di Monaco is a residential and cultural centre for refugees and other Munich citizens in the heart of the city, located at the corner of Müllerstrasse and Corneliusstrasse.

It runs and maintains three buildings, one for cultural and educational activities and two providing housing for almost 50 refugees. In one building, young adults share apartments in groups of four, accompanied into an independent life by social services. The second building offers eight apartments for refugee families and single mothers with children.

The Café «Bellevue di Monaco» is our gateway to the city. It is organized and run together with immigrants and refugees, our menu reflects the vast number of countries and culinary influences that our guests and the café team contribute to the Munich gastro scene. Our Cafe is a place where people from different backgrounds can casually meet and get to know each other, it is a meeting place for the residents of Bellevue as well as for our neighbors and people from surrounding offices on their lunch break. We offer free tea and water, our menu is based on a «social price range» (costumers pay according to their financial means) providing easy access for guests with lower or no income.

To help and support refugees with their start in Munich, we established a broad program of German language courses, social gatherings and consultation hours for different topics (general migration issues, immigration law, employment issues). We offer sports courses (running and boxing) and a sewing studio, intensive homework support (both for students in school and for adults in language courses), a bike repair shop and lots more. All our programs are mostly executed by volunteers.

We also offer a diverse culture program ranging from panel discussion on topics of migration and diversity to films from and about the home countries of our guests, to theater plays and concerts presenting artists from all over the world.

Last but not least, we help to improve the job situation for immigrants and create jobs. Our initiative «Lass mas halt arbeiten» brought the countless legal obstacles into the spotlight which refugees have to face on their way to work permits and which keep them away from the German job market. We brought together an alliance of ca 130 Bavarian companies and employers in desperate need of personnel who supported our claim.

We also created jobs for refugees in our Cafe and two more through a cooperation with a local fashion design label in an upcycling fashion project which we started only a couple months ago.

Who runs the project? 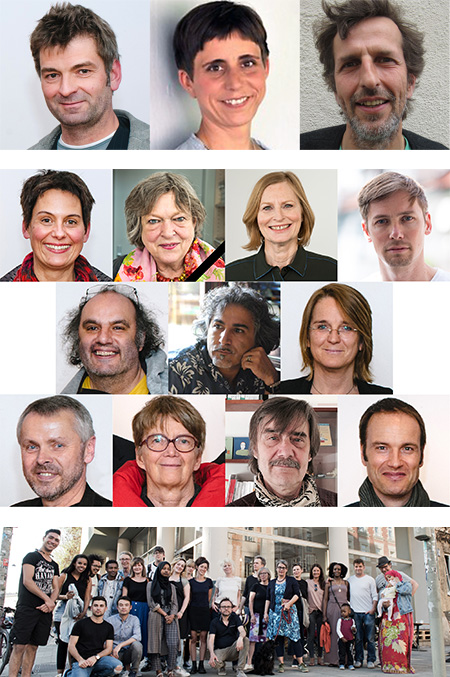 The cooperative has now more than 700 members representing the diverse and colorful Munich citizenship ranging from refugee supporters, social workers and political activists, to artists and politicians, to lawyers and managers and corporations.

They are united by the strong belief that a better, more humane treatment of refugees will benefit us all in the long run. That we want to welcome those who are here and that isolation has no future.

Today it is more important than ever to be pragmatic, unagitated and humane in making it possible for refugees to really arrive here. The Bellevue di Monaco should provide the space for this – and also be a forum for debates in which an urban society can address future issues such as exclusion and immigration, extremism and populism.

The Board of Directors

The diverse activities at Bellevue are coordinated by a team of 10 employees, most of them part-time in the sectors: counselling and services for refugees, volunteer support, cultural programme, networking and political work, public relations, the café, building activities and administration of the houses, as well as the office of the social cooperative. They are regularly supported by interns and FSJ volunteers.

The first rooftop sports court
in the heart of Munich 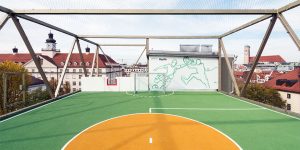 We strongly believe: Munich belongs to everyone! Young & old, rich & poor, newcomers & established! We also believe that creative, economic and equal use of space is absolutely necessary for a humane and socially equal living in big cities.

In Munich’s dense inner city commercial-free open spaces for sports are absolutely scarce, although urgently needed. This is getting even more dramatic in the Covid-19 pandemic where school yards are closed and children and athletes are encouraged to follow social distancing rules even when doing sports.

We are building a sports court on top of the 7th floor of one our buildings, accessible for everyone, whether refugee or not, in the middle of the gentrified Glockenbachviertel. The court will be named after Kurt Landauer, the legendary Jewish president of FC Bayern, who survived the time of National Socialism in exile.

The roof courts is financed 100% by donations and sponsorships. Many athletes, artists and public figures from the city like players from FC Bayern München and Munich’s mayor Dieter Reiter support the project and help fundraising, e.g. they took part in a short cinema advertising film «Let it Fly».

The construction work has started in April 2020, official opening was in October 2020. 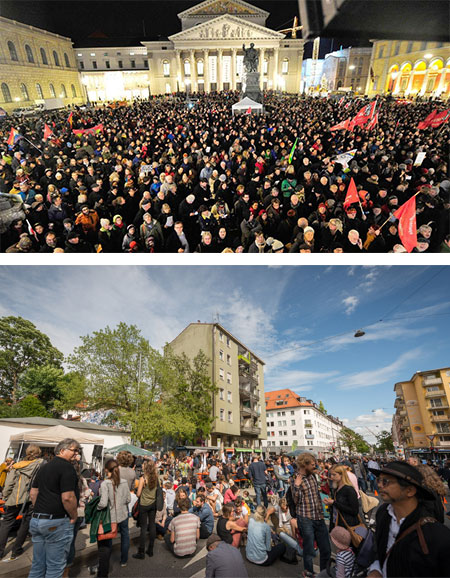 In the summer of 2014, after an intense debate about vacancies in government owned buildings and fused by the rising problems of migration and refugees, an activist alliance was formed committed to bring these issues together and move them from the outskirts to the heart of the city.

The alliance gained further momentum and public recognition by organizing the first big mass demonstrations in Germany against «Pegida» and emerging right-wing ideas where more than 20.000 people came together to show that Munich stands for tolerance and openness.
In March 2015 a non-profit cooperative was founded with the aim of establishing a housing and cultural center for unaccompanied youth refugees and for Munich residents in the city center: the Bellevue di Monaco eG was born.

Three buildings in Müllerstraße 2-6 had by then gained recognition beyond the city limits. The Munich government had planned to tear them down – and the adjacent football court – to create space for larger projects. Loud and persistent protest from neighbors, athletes and activists joined by many well-known Munich citizens e.g. Sportfreunde Stiller, Bastian Schweinsteiger, Mehmet Scholl, Dieter Hildebrand and many others made the government rethink its plans.

In April 2016, the City of Munich finally gave in to the initiative’s demands and granted a leasehold over the three buildings to the newly founded Bellevue di Monaco e.G. for 40 years the project could begin!

A two-year renovation period started in which all three buildings underwent fundamental renovation, but with the official opening in 2018 the construction phase was largely completed and more than 40 refugees had moved into their new homes, the Café had opened its doors and the cultural program and the language and counseling programs started. 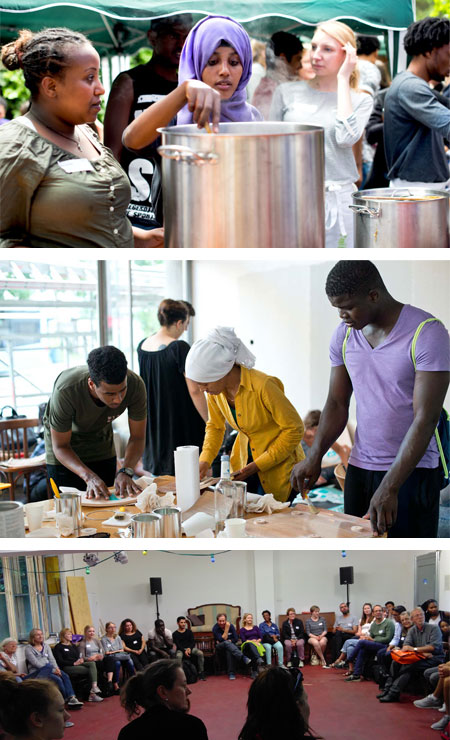 The Bellevue di Monaco project is based on close cooperation with numerous renowned partners, which guarantees a lively and high-quality design.